Good grief! Look at the size of these things! 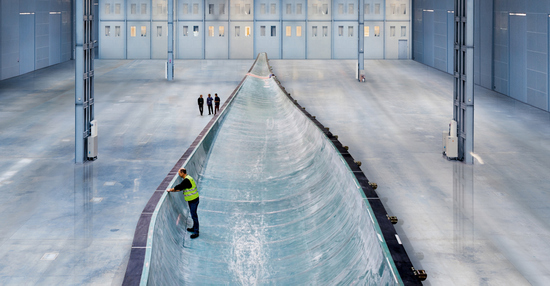 Siemens send me press photos from time to time because I sometimes write about new trains/rail tracks and other transport tech. They've just sent me these shots of their new 75 metre wind turbine blades (they've just produced the first batch).

They will be installed on the second prototype of Siemens’ 6-MW offshore wind turbine, which will be erected in the second half of the year in Denmark’s Østerild Test Station. 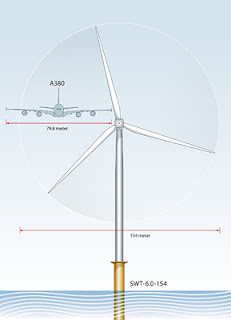 
The 75 meter long B75 Quantum Blade demonstrates tremendous strength at a low weight and, thanks to its unique airfoils, offers superior performance at a wide range of wind speeds. If the B75 Quantum blade were produced using traditional technology, it would be 25-50 percent heavier. Heavy blades are subject to higher loads and require stronger nacelles, towers, and foundations. The combination of intelligent design and low weight has a correspondingly positive effect on the power generation costs for wind energy.

But just look at the size of that mould!

Then it begs the question: How do they get it there??

Well, it seems they've got a special truck... 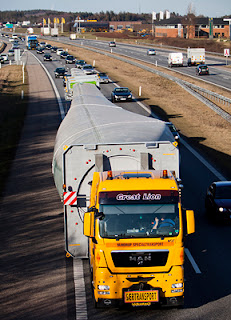 Their special vehicle, traveling 60 kilometers per hour, transported the giant blades over a distance of 575 kilometers from the blade factory in Aalborg to the Danish town of Nakskov on Lolland Island. By car, the trip is about 330 km, but because of the length of the rotor blade some re-routing was necessary taking bridges and tunnels into consideration. In Nakskov the blades were painted – the painting cabin at the blade factory is currently limited to 58 m blade length.

Fantastic engineering. I wish we were doing stuff like this in the UK. I know we have a well-respected wind turbine industry but I don't believe we're manufacturing on this sort of scale.
Email Post

Unknown said…
The UK seems to have lost its lead with wind turbine technology. The real reason there are so much opposition to them is almost entirely down to money. They might lower the market price of an Englishman's castle. If those living in the area affected by the wind turbines received very cheap electricity or rate rebates perhaps there would be a queue to get them into Middle England.
Finally, and please take this as constructive. The comment procedure for you blog would put off anyone without an insatiable need to leave some words.
Firstly when the comment box comes up you can no longer reference parts of the post. Secondly the anti spam measures are a real pain to complete. Your other sites don't get spammed and they don't require you do do cryptology and provide your Wordpress identity including http:// etc.
I'm currently on my third attempt as it says I need to login to Wordpress yet it doesn't ask for my Wordpress password. Now trying Google account...
Now on fourth I couldn't recognise the characters...
2:30 pm

Yeah, I think you're right... on land at least.

I personally don't mind them. I like to see them. But I don't have to live near one.

I imagine it could be really disturbing to have that continuous movement in the corner of your eye all the time. The large ones probably make light levels flicker.

But out at sea... as far as I'm concerned, the more the merrier!

Re the comments system. Yeah, point taken. TBH It's just bog-standard blogger (and plenty of spam still gets through!), but maybe I can set it to a lighter touch.

I'll delete one of your doubled up comments... any preferences?
2:44 pm 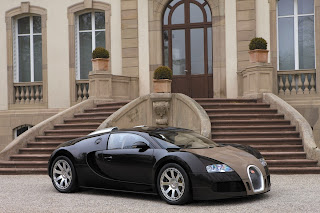